some kinds words from Frans de Waard in the recent issue of Vital Weekly!

"Blake Edwards, the man behind Vertonen, is not someone who does things by half, as he proves, once again, with three new releases. I am quite a fan of most of his work, except for some of his noise work. With such a body of work, you could think that much of it is in the similar musical territory, but then you are wrong.

The approach Edwards has towards the world of drones has many faces and here he shows how that works out. 'Shallows' and 'Shallows II" (not sure why he didn't use a double CDR release in one package) are work in which he uses field recordings, drones, small objects and creates some very interesting sound collages with this material This time it is not all put together in one big mass of sound, but in a more linear approach. Vertonen explores a few sound events and then moves on. On 'Shallows' there are more or fewer breaks within the piece, whereas on 'Shallows II', they are cross-faded slowly. The cover details the various sections, and they all have track titles (which reminded me of track titles by Hands To), so why he didn't go for cutting these into separate tracks, I don't know. The differences, so I gather from the information, lie in what sounds are used.

On 'Shallows' this is "raw and processed field recordings with a focuses on over air recordings from closed, resonant internal spaces (churches, ventilation systems) external spaces (fields, forests) and external transmissions (shortwave radio)" and on 'Shallows II' "small manipulated objects and machines (cassette and microcassette recorded direct, small wood and metal assemblages), and processed field recordings", but it is not easy to distinguish that with the result found on these discs. On 'Shallows II" there is a whole section that I would think is all ventilation systems. Which, perhaps, only means, what do I know? I very much enjoyed the quiet approach Vertonen has here, bringing a much-needed rest in the headspace here, following some turmoil of a few days.

The linear approach as well as the collage-like style of using different elements to tell his story works wonderfully well. The covers are hand-painted gouaches and will disappear over time, depending on how you handle them. I love that idea.

'Elettra' is a somewhat different work, a bit louder and working with 'raw and processed shortwave signals'. I love the use of shortwave signals a lot. It is, next to the human voice, one very easy instrument to play (although it needs practice and creativity; that goes without saying). I have no idea if Vertonen uses a real radio or uses the one from the University of Twente, which allows you to tap deep into all short, mid and long frequencies worldwide. Also, I don't know what Edwards does with these radio waves in terms of the processing; analogue or digital or perhaps a combination. He does something, that I am sure of. I believe I hear in each of the six sections to hear a mix of various signals and a few additional sound effects. Throughout this album is all a bit louder than the other two, or rather more present in the overall sound approach, but at the same time, it is effectively music of a similar quiet approach and deep listening. This is closer to the more usual drone approach of Vertonen, and it has the usual intense and mysterious sound that I know and love so much from him. There are so many voices on this release, just radio waves in many layers, and coloured by the use of sound effects. Excellent release. It once again made me think that a book on the historical use of radio signals as instruments is something I would welcome a lot, providing people such as Vertonen will get a place in there too!

When Eric and I were talking at the end of 2020 about ideas for forthcoming dead edits releases, we landed very quickly on “dice game.”

This is the result. 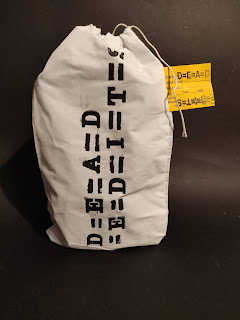 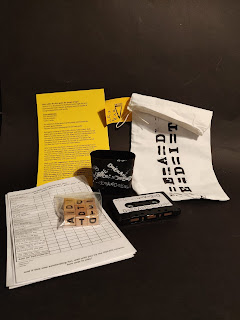 The game is essentially rolling dice to spell words (thanks, Canadians playing on their yachts in the 1930s!), although we suggest variants that encourage neologisms, exquisite corpses, and other ways of playing with language. Consider it an extension of the idea of recordings that encourage audience participation (lock grooves mutli-speed records, etc.).

The audio (c-16) is split up as follows:
side 1 is a study of tape warble accompanied by the sounds of Blake rolling dice and Eric finding words in the dice he rolled. Side 2 is Eric continuing to find words while Blake pronounces whatever "words" appear with a single roll of the nine die. Blake’s cat Em Dash makes some guest appearances.

Consider the recording a combination of Trista Tzara’s offer to write a poem by pulling words out of a hat, a field recording, vocabularyclept poetry, and sound poetry.

Edition of 16 signed and numbered copies. $30 ppd in the US—overseas, please get in touch for shipping.

from left to right:

ballast nvp035: vertonen: shallows II CDR
shallows II focuses on small manipulated objects and machines (cassette and microcassette recorded direct, small wood and metal assemblages), and processed field recordings. This recording was fueled by a desire to explore some ideas / structures in different settings (and with different aural emphases) thank shallows. Still plenty of activity in the stereo field, though, and still generally quiet listening. some voices. Numbered edition of 33 in cardstock sleeve.

Both shallows and shallows II come with hand painted (gouache) covers that are designed to wear off over time, depending on handling. “Nothing left now but the recordings” indeed.

each disc is $8 ppd in the US (or $20 for all three): overseas, please get in touch for shipping info. 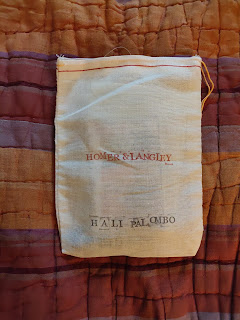 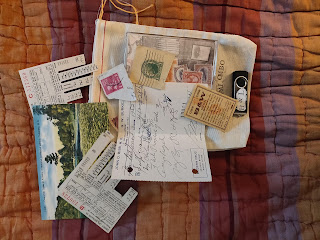 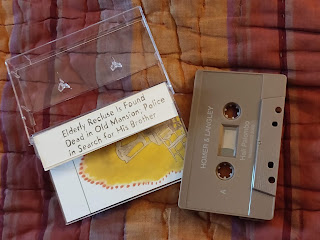 Hali’s work focuses on processed 78 RPM records and cylinder records, shortwave, CB, and field recordings. Her releases and live performances are immersions into odd liminal worlds, where signals and ideas crossfade and collide, distorting originals forms just beyond the brink of familiarity yet retaining enough grounding to recall familiar forms.

“Homer & Langley” is an audio tour (of sorts) of the Collyer brothers’ mansion in New York—often considered one of the first examples of “hoarding” brought to the public’s eye in America. Reflective of the literal impenetrability of the property given all the obsessively collected materials inside, these two short tracks offer intriguing slivers of an aural glimpse inside the mansion.

For a more immersive “visit,” the first 20 copies come with a bonus flash drive containing the following:
1) a 15 minute narrative (with accompanying soundtrack) by Hali about the Collyer brothers (in both .wav and .mp3 format)

The 15 minute narrative comes in both .wav and .mp3 formats.

These first 20 copies come in a hand-stamped cloth bag with an envelope filled with early 20th century ephemera assembled by Hali.

Edition of 52 copies. $10 ppd US; overseas, get in touch for shipping.